Licensed in USA and Canada, we proudly helped patients from around the world.

Ketones are important respiratory fuel created from fatty acids and act as the main reserve fuel for the brain when glucose is low or in times of very high energy demand, such as a low-carbohydrate diet, prolonged exercise, or lactation. In fact, when ketones are abundant in the blood, such as during caloric restriction or a ketogenic diet, the brain can obtain up to 60% of its energy from their oxidation. This condition, known as nutritional ketosis, can be maintained for years, and is quite different from metabolic acidosis/pathological ketosis, which can arise in type I diabetes due to severe insulin deficiency. Ketones do cross the blood-brain barrier and have been shown to be neuroprotective, promoting oxidative defense, NAD+/NADH ratio, and enhancing mitochondrial respiration. In addition to acting as an energy source for the brain, ketones also support cerebral blood flow.

In a human intervention study involving 20 elderly subjects and young controls, administration of 30 g MCT to increase ketone concentration resulted in an increased overall brain energy metabolism by 3%, without altering brain glucose consumption. It has been shown in animals that ketone bodies can also replace glucose as a cellular signal in the central nervous system. Fasting in humans is associated with an increase in ketones. Conversely, administering ketones directly into the brain of rats results in body weight loss without changing food intake, nor affecting blood glucose levels or liver glycogen levels. Subcutaneous injections result in decreased food intake, specifically targeting a decrease in meal frequency and the time between meals.

Provides weight management support as part of a healthy lifestyle with a reduced calorie diet and regular exercise.*

• Offers a blend of ketogenic mineral compounds to support healthy brain function, weight management and athletic endurance*
• Designed to be used in combination with a low-carbohydrate ketogenic diet and/or to support brain and muscle function*
• 10 grams of beta-hydroxybutyrate per serving
• Convenient, great tasting strawberry-lemonade powder formula for easy dispensing
• Made with hypoallergenic, vegan ingredients

There are no reviews yet.

Be the first to review “KetoBrain Energy 10.6 oz” Cancel reply 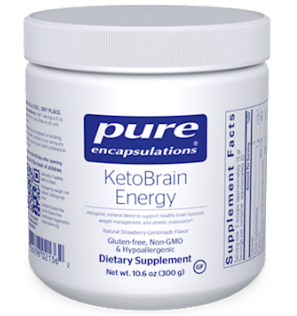